The Long and Windy ROAD (IPv6) 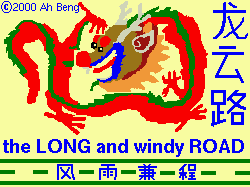 This is a brief history of Internet routing and addressing (ROAD) evolution especially the IPng (Internet Protocol Next Generation) in the early 1990s. It was somewhat a cloudy and windy LONG (dragon) thing. The IPng is currently known as IPv6.


This is HOW Me Do IT! Grrr... this blog memo is mainly written for OWN PURPOSES. This post is based on "Google There, Google Here, Try That, Try This, Then Ask". Whether this is PLAGIARY or RESEARCH, there has never been a claim that this is an original work, nor is it necessarily the best solution, and not for Scopus consumption :). Please provide feedback, especially if you have alternative explanations. Hopefully, this note will be helpful in the future when you have forgotten how to solve this trivia problem.

Git is a free & open source, distributed version control system designed to handle everything from small to very large projects with speed and efficiency (1).